By selective matings on cow families proven to be consistent transmitters of desirable genetics we breed efficient, hardy, trouble-free cows with long, profitable, and productive lives.

A BRIEF HISTORY OF OUR HOLSTEINS

The dairy cows you see here at Pineland Farms comprise one of the oldest registered Holstein herds in the United States. A “registered” cow means that the animal’s parentage is known and is certified by the United States Holstein Association.

The herd was started by the well-known Merrill family at a neighboring farm in Gray, Maine in 1881. The Merrills developed the herd until both the farm and herd were purchased by Michael and Marilyn Wilson in 1961. 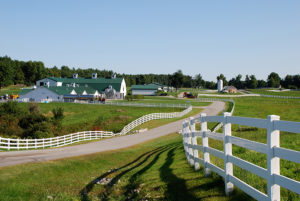 At the time of the Wilson’s purchase, there was a yearling in the Merrill herd named Trina Redstone Marvel. That young cow’s lineage went back 16 generations in direct female line to one of the very first cows imported to the United States from Holland. “Old Trina”, as she came to be known, was not only an exceptional milk cow but she transmitted her traits to descendants with remarkable consistency. Transmitting ability, more than any other quality, is the key to any successful breeding cow.

In the decades since 1961, hundreds of superior cows in the herd can be traced directly back to Old Trina; so much so, in fact, that her descendants have become known as a distinct cow family within the Holstein breed, the “Trinas.”  Cows in today’s herd whose names begin with a “T” or an “R” are part of the Trina family.

Three generations of Wilsons developed the herd and were awarded the coveted “ Master Breeder” designation in 1999. Pineland Farms acquired the dairy herd from the Wilsons in 2001 and moved it to this new milking barn. In addition to the Trinas, the herd includes outstanding individuals from several other nationally-known cow families. Hundreds of progeny from the herd have been exported over the years to European countries, Japan and elsewhere. The “Wilsondale” prefix was used until 2001 when Pineland Farms purchased the herd and began marketing cattle under the “Wilson-dale” prefix and then the “Pineland” prefix.

Pineland Farms continues to breed some of the very best milking cows, carrying on a tradition begun well over a century ago.

WHAT WILL YOU FIND ON VALLEY FARM?

Valley Farm is a working Dairy Farm with a Dairy Barn, Heifer Barn, Calf Barn & Hay Barn. A Farm Pass will grant you access to tour the barns at Valley Farm & the Farmyard at your own pace. Other barns, not open to the public include storage, office & maintenance barns. 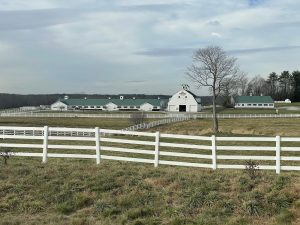 This is where we milk our Holstein cows twice a day, at 4am and 3pm. On average, each cow produces 8 to 12 gallons of milk each day. You’ll also find the Milk Room which houses the storage tank where raw milk is held until our distributor collects it.
Open: Year Round

This is where our heifers (female cows from 10 months to 2 years who have not yet given birth) live.
Open: Year Round 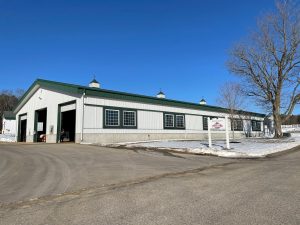 The Calf Barn houses our youngest Holsteins. Our farmers spend a lot of time looking after our youngest animals and making sure that each calf is given the very best care. The Calf Barn is the warmest barn at Pineland, it is heated during the cold winter days. For more information about the calf barn click here.
Open: Year Round 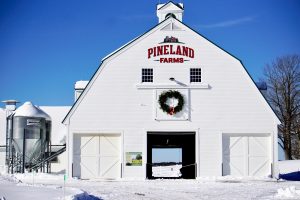 Situated on some of the most picturesque landscapes in Maine, our working farms are an essential part of the community. They provide local milk and fresh seasonal produce to many area retailers as well as our own Market. Our world-class dairy farm serves as an educational facility for children and adults to learn about sustainable food and farming practices.

Our Equestrian Center is a state-of-the-art facility that breeds and promotes quality Morgan Horses.

Check out our Calendar for information on classes and events at our farms.